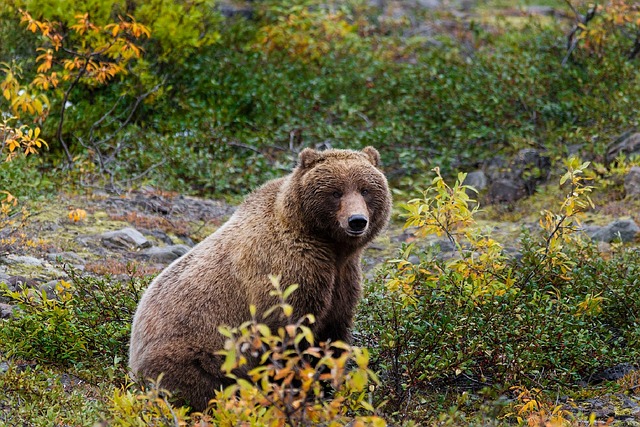 Long Answer: There are way too many variables to take into consideration as to WHY the bear will attack. Knowing why the bear is taunting and roaring at you will give you a better idea of what defense tactics you should use. For example: A bear protecting her cubs is different to a bear that wants to eat you alive. So, do bears attack people? In this article I will be explaining how you should react and defend yourself in different situations.

Avoid bears in the first place by talking, singing or clapping, which will let the bear know you are nearby so they can go in the opposite direction. Although if you see one in the distance (100m or more), don’t call out to him. Retreat slowly and give the bear plenty of space.

If it has noticed you and the bear is more than 100m away, talk softly to let the bear know you’re a human. The bear has poor eyesight for that distance.

Don’t make eye contact as this can force the bear to charge.

Bears are usually quite passive against humans. Although you don’t want to get on the bad side of one. 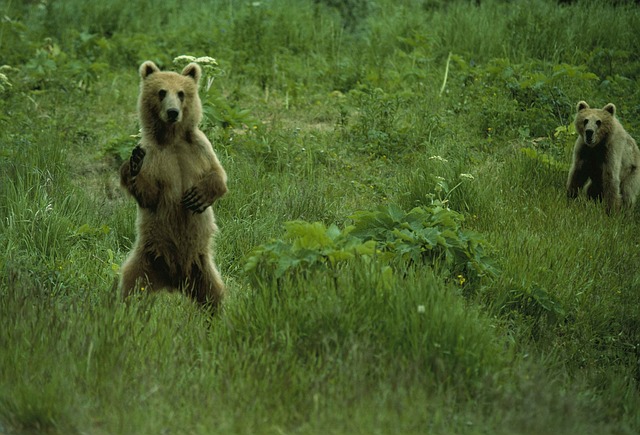 First-Year Cubs – The bears defending their first-year cubs which are in a tree are often protecting the area. If you are too close, the bear may attack to eliminate you as a threat.

Defending A Kill Site – Multiple bears are defending a carcass and will heavily defend it and might attack if you get too close. You can spot a kill site by finding scavenging ravens and multiple birds flying around one area

Predatory Bear – This is a bear in an aggressive state, and sees you as prey. This is very rare but it can happen, and mostly likely from Black Bears.

How To Defend Yourself Against A Grizzly

While you’re out exploring the great outdoors and having general outdoor fun, there’s a high chance you’ll come across a bear. Read the body languages above to remind yourself of what the bear is trying to tell you.

Grizzly Bears Defending Their Cubs – Don’t act as a threat, but merely try to tell the bear you are just going to back off slowly. Talk in a quite voice and try to make yourself look as small as possible while moving back slowly. Do NOT turn your back, and Do NOT run! If the bear doesn’t let you go then read below how to defend yourself. 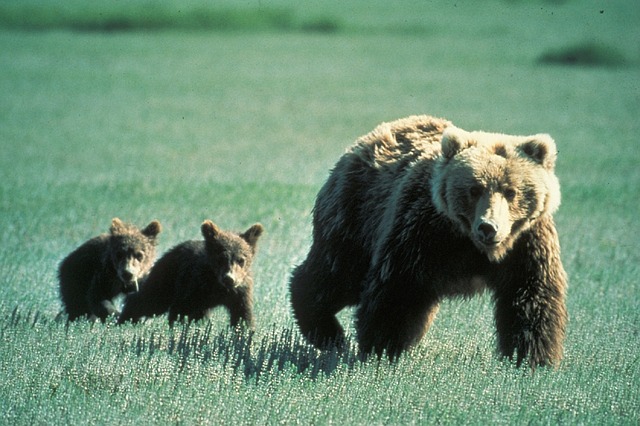 Note: In the wilderness, animals that run ALWAYS bring on a chase, so don’t run and the bear won’t chase you.

Grizzly Bear Attacks While Trying To Defend Cubs – If the bear is in attack mode, ears are forward, and the bear is openly moving forward with confidence, it will circle you and decide if he/she will attack or not.

You will need to look as big as possible, legs wider than usual, stand tall, shout, make eye contact, clap or wave a stick, if you can grab one slowly (fast movements can frighten a bear causing it to attack). The bear might make a series of ‘bluff charges’, just to see how you react. Don’t show your fear!

Note: Try to back away after the first charge, the bear will usually do 1 or 2 bluff charges to give you a chance to leave. If the bear doesn’t let you back off then follow instructions below.

If a charge gets too close and the bear is actually going to attack – play dead. Only if the bear is defending her cubs. Lie on your stomach, legs apart so the bear can’t roll you over, hands over your neck with your fingers interlocked to prevent the bear from biting your neck.

Predatory Grizzly Bear, Wants You For Dinner – Very rare, but again, try to determine why the bear is attacking. If you know there are no cubs nearby and he/she is moving in for a kill, circling you while huffing, puffing and swaying head, follow the rules that the bear is giving you a chance to leave after the first charge, if the bear doesn’t let you leave then you better be prepared to fight!

Follow the steps outlined above but when the bear charges and attacks, your chances of surviving have increased if you hit the bears sensitive parts. Punch him in the eyes and nose. Or even stab him with a stick if you can grab one. 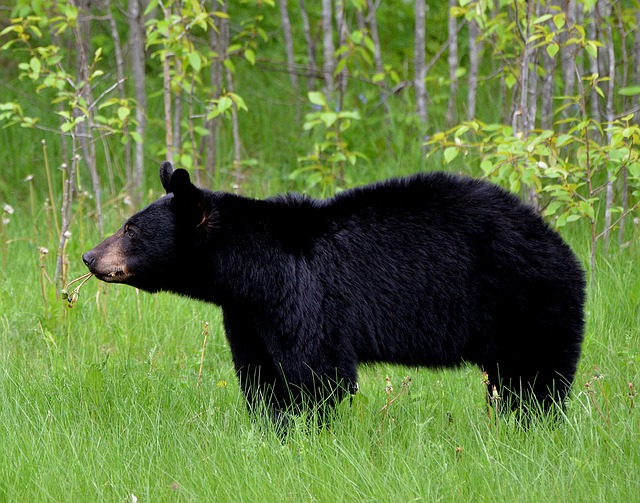 A lot more predatory creatures than grizzly bears, but they are a lot more scared of us too. Follow the exact same tactics outlined above, even if the bear is trying to defend her cubs the bear will still try and kill you.

NEVER play dead against a black bear. Your chances of surviving against a black bear is higher than a grizzly, always stand tall, legs wider to make you look bigger, shout and wave a stick or your hands at the bear. It may perform a few bluff charges but at the end of the day, you need to show the bear you are ready to fight and you are not afraid of it.

Black bears that attack you are very rare if you show you will fight back. 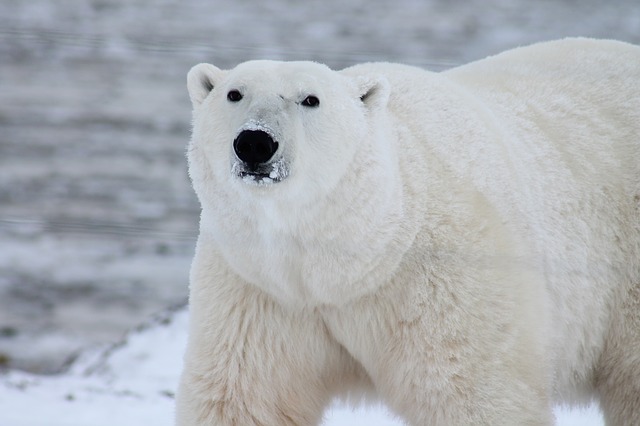 On the other hand, your chances of surviving a polar bear attack is actually very slim. Don’t play dead EVER against a polar bear and don’t run either. They see everything as prey.

If a polar bear doesn’t see you, don’t make any noise to let him know you’re there. But DO act as a threat if he does see you, stand straight, legs wider than usual and act like it should be scared of you.

Don’t make any noise against a polar bear as this will make the bear curious and want to move forward to the noise to see what it is.

This video is a great example showing you how to defend yourself against a polar bear.

Pro Tip: Wherever you go in polar bear territory, ALWAYS take a huge ass stick with you and smash it on the ground to scare them off, lol.

Again, same tactic as against other bears except you’re not making any noise. Show you’re not scared and show that you’re ready to fight with everything you have.

I mentioned this last because sometimes you may not have pepper spray with you.

When’s the best time to use pepper spray? Never purposely approach a bear because you think you’re safe with the bear spray. This is only created to temporarily daze the bear giving you enough time to get out of there, and it might not always work so always be prepared to fight.

Use pepper spray on all bears when they are charging, when the bear is about 30-40 feet away use the pepper spray and create a “cloud” between you and the bear. When the bear gets close to you the spray will daze the bear and give you enough time to get away, while following the rules to never turn your back. Walk away fast but without running.

Note: Before you use the spray, make sure it won’t be affected by wind, ultimately making your deterrent worthless if it doesn’t actually hit the bear.

Bear/Pepper spray is only meant to be used for a charging/attacking bear!

A couple of notes to take into consideration…

Don’t let this guide put you off camping/hiking or exploring the great outdoors, because the chances of a bear charging you are slim, they are scared of us as much as we are scared of them. Learn to know bear behavior and avoid any potential charges in the first place. And no matter what, or where you are, if you’re out in the wilderness you should ALWAYS be prepared to fight.

If you found this article helpful please let me know by commenting below and I’ll get back to you asap.